The team installs a calendar on one of the room’s walls. The format of the calendar allows each team member to record, at the end of every workday, a graphic evaluation of their mood during that day. This can be either a hand-drawn “emoticon”, or a colored sticker, following a simple color code, for instance: blue for a bad day, red for neutral, yellow for a good day. Over time, the niko-niko calendar reveals patterns of change in the moods of the team, or of individual members. 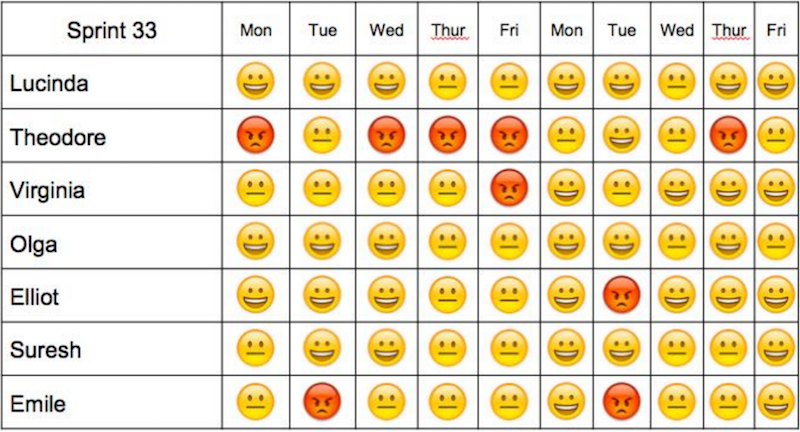 Picture from Portfolio Visualization and Prioritization for Business Agility – Workshop

The Japanese word “niko” means “smile”; following a common pattern of word doubling in Japanese, “niko-niko” has a meaning closer to “smiley”. The term “mood board” is also seen. It is an information radiator.

The value of this practice lies in making somewhat objective an important element of team performance – motivation or well-being – which is generally seen as entirely subjective and thus impossible to measure and track. This may be seen as an illustration of the Gilb Measurability Principle: “anything you need to quantify can be measured in some way that is superior to not measuring it at all.” In other words, a measurement does not have to be perfect or even very precise, as long as your intent is to get a quantitative handle on something that was previously purely qualitative; the important thing is to take that first step toward quantifying.

As with other activities, such as retrospectives, where team members are asked to report subjective feelings, self-censorship is always a risk. This could be the case, for instance, if team members who report poor days are blamed for “whining”, by management or by team mates.

Let us know if we need to revise this Glossary Term.