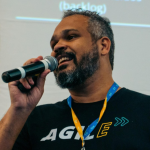 I am a software developer that went through all IT steps. I started in 1998 with microcomputers maintenance. In 2000 I became a programmer, and since that, I played the role of developer, systems analyst, project manager, Scrum Master, Product Owner, functional manager and Agile Coach. I participated as a student, trainer, and co-trainer in several courses about Agile. In the last three years, I was the assistant professor in the course of Agile Software Development in the Federal University of Rio de Janeiro. In 2015 I became the Software Development Manager in the Regional Electoral Court of Rio de Janeiro. Over time, I realized that I had acquired some interesting knowledge and experience in adopting Agile. Some colleagues called me to act as Agile Coach, they liked the results, and since then I have dedicated myself to this new career.