The Carnival in Rio de Janeiro is world famous! Every year, since 1893, this immense and exuberant spectacle begins 40 days before Easter and it’s celebrated for five days. Millions of Brazilians and visitors travel to the city from all over the world to join in this unusual spectacle.

Colourful parades of music and dance take over the streets. The Guinness Book of World Records declares this festival is the largest Mardi Gras in the world. (It attracted over 10 million people in 2020). 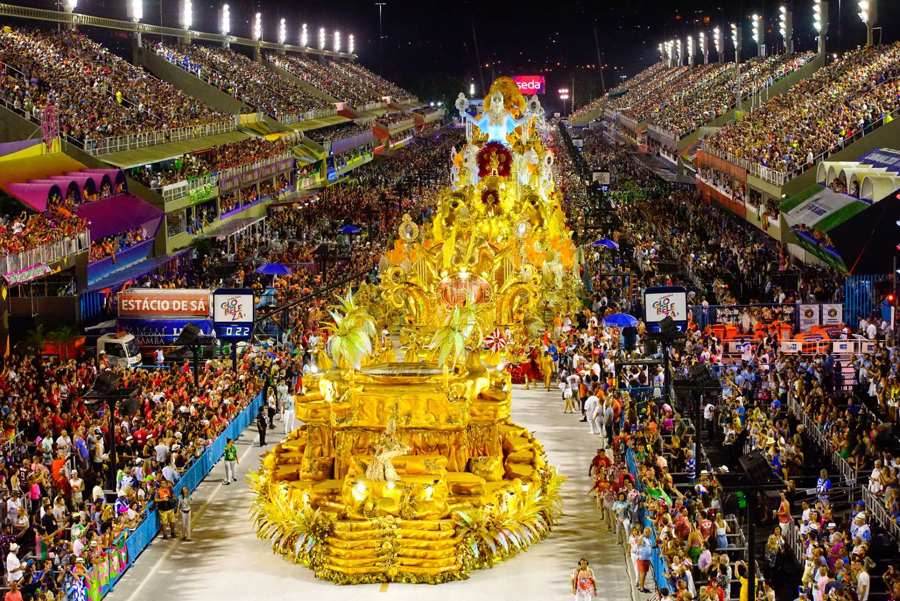 Music plays a central role in Mardi Gras. The dancers accompany the joyful parades to the sound of a live samba beat. The origin of this music goes back to the emigrants arriving in Rio at the end of the 19th century. The coffee industry boom and the abolition of slavery created great migration flows within Brazil. Many former slaves from the state of Bahia settled in Rio de Janeiro and took their dances, music and traditions with them—many showing a distinct influence from the African continent. Other colourful elements, such as floats and exotic clothes, were added to the Mardi Gras.

Each neighborhood in Rio has its own favourite blocks (street bands), called “cordões”. The city has over 300 blocks and its number continues to grow every year. Each musical group presents its own musicians and samba dancers, their own songs and choreographies. In the Carnival period, they always parade and perform in a defined place in the city. The most famous (and largest) blocks in Rio are “Cordão da Bola Preta”, a traditional group that performs in the city centre, and the “Banda de Ipanema”, which parades in the Ipanema neighborhood.

The highlight of Rio de Janeiro’s Mardi Gras is the parade at the Sambódromo, a specially built footbridge. For several months, the samba schools of Rio de Janeiro prepare their show, which involves 2,500 to 5,000 participants. Each school has its own theme which is depicted in intricate detail with exotic hand-made costumes. Each year the jury awards names the best school, the most beautiful floats and the best samba queen. Tickets for this disputed event sell out very quickly.

At Rio’s gigantic Mardi Gras there’s no point in repeating a samba plot or a fantasy that has been successful in another year. It’s necessary to innovate. Success doesn’t come from replicating winning formulas.

With so many winning frameworks and formulas for starting performing an Agile implementation, how do we keep Agile innovation alive from year to year? At this #Agile20Reflect festival we’ll ask you “how are you making the old new again? What new stories can we tell? How do we find and create them?” Register now to join us at our Agile Mardi Gras. You’ll help us to explore ways to incorporate and build on familiar dance steps, so that we continue impacting people and business in ways that are alive and vibrant.

Guilherme is a Leader in Innovation.
He strongly believe that leading innovation is not creating a vision and inspiring others to execute it, but being an aggregator of points of view and creating a world to which people want to belong, fostering collective creativity.
He is a facilitator and catalyst for change to improve the workflow and interaction among professionals around the world, strengthening visibility, awareness of the whole, expectations management and self-organization.

He disseminates the Agile mindset by monitoring and encouraging the formation of multidisciplinary professionals and strengthening transparency and connection with the strategy to create meaningful services and products.